Remington has a history that goes back to the 1920s, and they were renamed as the Remington Power Tools Division after later being acquired by the Remington Arms Corporation – and they have a strong reputation for creating high-quality power tools that are perfect for heavy, professional use by contractors or just some jobs around the house.

Here’s why the Remington RM4216 Rebel 52cc chainsaw should be at the top of your list when it’s time to purchase a new chainsaw model for your home or business.

The Remington RM4216 Rebel was designed to be a lightweight-yet-powerful chainsaw that starts with ease and is capable of handling almost any kind of job that you can throw at it, including fine art sculpting with chainsaws (whether wood or ice), small or moderate lumber cutting and more. 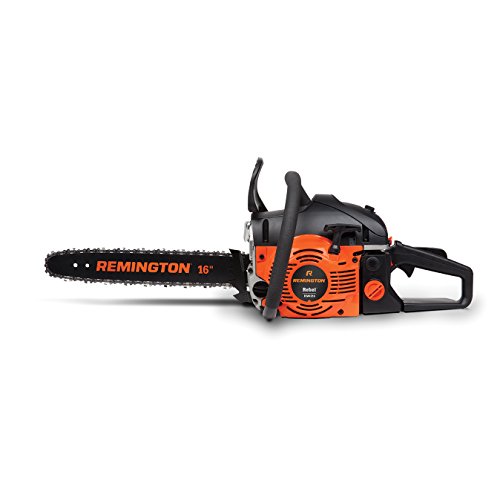 Interested in buying the Remington RM4216 Rebel for your home or business? Here’s what you should know about the core product features.

So, how does the Remington RM4216 Rebel match up when compared in terms of power, design and safety features?  Here’s how it performs in practice.

Not sure whether the Remington RM4216 Rebel is the right chainsaw model for your needs? Here are some of the pros and cons if you can’t quite decide yet.

Pro: The Remington RM4216 Rebel chainsaw has been made for comfort, safety and a comfortable grip.

The Remington RM4216 Rebel is made for ease-of-use, and while some people have said that they find this model to be heavy, most users have praised the added comfort features of the Rebel, including the padded grip and low vibration that gives you more control when you need it.

Pro: The Remington RM4216 Rebel runs with the big dogs, and it’s perfect for amateurs and professionals.

The Remington RM4216 Rebel is perfect for heavy-duty professional use, so it’s perfect if you’re a contractor who will be making use of your chainsaw every day for several months at a time during the busy season – at the same time, it’s also perfect for anyone who just needs a chainsaw around the house for maintenance.

Pro: Operates with a very low amount of vibration.

It’s a common complaint that chainsaws produce a lot of vibration that makes its way through the user, and this can make your chainsaw feel like an uncontrollable, angry bull you’re holding on to instead; the Remington RM4216 Rebel is made to operate with a low amount of vibration for extra safety.

Con: The weight of the Remington RM4216 Rebel is considered to be a serious drawback.

While some seasoned professional users will be well acquainted with the weight of your average chainsaw, users who don’t work with heavy machinery such as this every day will find that the Rebel is on the weighty side – this isn’t as much of a drawback as it is something to keep in mind while you’re operating the chainsaw, especially for jobs that require some extra elbow grease.

One of the most common complaints about the Rebel is that it sometimes leaks oil when put away in storage for an extended period of time – but this isn’t a problem considered to be unique to the Rebel by any means: It’s something that happens to most chainsaws requiring oil, and the only thing you can really do about this problem is to ensure that you drain the oil and clean your chainsaw properly after use, especially if it’s going into storage for a while.

Con:  It can be slow for some super-heavy jobs.

The Remington RM4216 Rebel offers a surprising amount of power that’s more than enough to get through even the hardest jobs – but this doesn’t make it flawless, and even though it’s one of the best chainsaws available on the market, some users have still reported that they find this model to be slow-performing with especially hard-to-cut timber – still, if you pace yourself, you can cut through pretty much anything in no time.

The Remington RM4216 Rebel is one of the best chainsaws you’ll find, whether you’re hoping to rely on it for casual use at home or want something more out of it like daily, heavy-duty professional use. Some users might find it on the heavy side, but it has just the right amount of power and control to make it stand out.

Want to know even more about why you should consider adding the Remington RM4216 Rebel to your shopping cart? Here are some of the most common frequently asked questions about this product.

Most users reported the chainsaw already being assembled when they got it, and only a little adjusting was needed at most – though other users have reported that they had to install the chain themselves, and this seems to be down to the shipping or store protocol from where you got your chainsaw.

A lot of users who aren’t used to chainsaws won’t know how to use the safety features, and it’ll seem like the chainsaw won’t start: In this case, the safety catch involves holding in the handle, and making sure that the on/off switch is in the right position.

A lot of users want a chainsaw just for casual use and maintenance around the house, but many people who need a chainsaw for more professional use asked whether or not the Remington RM4216 Rebel is fit for professional use – and yes, officially this is classified as a semi-commercial use chainsaw, which means that it can handle most jobs falling short of heavy, industrial ones just fine.

Use only a mix of environmentally-friendly fuels and oil; see your user manual for just how much the mix should be, or ask the hardware store where you purchased the chainsaw for their recommendation. Don’t use any metal-heavy fuels that can cause damage to the engine over time, and definitely don’t try to use any replacements for fuel instead.

Along with the chainsaw, you’ll also get a user manual (recommended reading!), extra chain oil recommended by the manufacturer and also a handy carry case to protect your chainsaw from dust or damage when it’s in storage or in transit to a job.